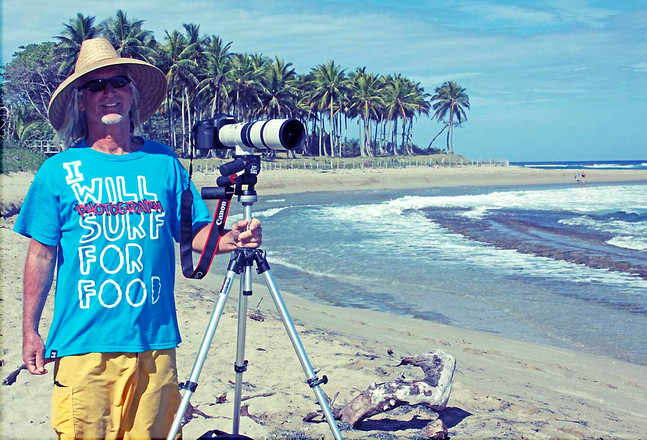 My introduction to photography began at an early age. In 1955 I moved to Ocean Grove, New Jersey with my grandparents. My grandfather was an avid amateur photographer and traveler. He held regular slide shows where we all gathered around in the hotel lobby which they purchased as their “retirement” job. As much as everyone makes fun of the slide show back in the day, I actually liked it. Those of you old enough remember there was limited TV back then and it was good entertainment as my grandfather was quite good, winning several awards at local and state wide camera clubs.

In the mid sixties, when I first was introduced to surfing, I borrowed my father’s Argus rangefinder 35mm camera, loaded it with black & white film and my friends and I began taking some photos of each other surfing. A friend that was in the photography club in high school would process the film and make some small prints. That ended when someone used the camera to take some inappropriate photos which the physics teacher came upon in the school darkroom.

In the early 70’s a friend of mine’s father had the printing contract with Monmouth County Multiple Listing Service and got me a part-time job photographing houses for sale. That job paid for college. College was a lot cheaper then. While in college I took several photography classes and fell in love with the medium. It allowed me to be creative with my inability to draw anything more than stick figures. Got a little money and bought myself a Pentax Spotmatic, a classic 35mm SLR. Got a little more money and bought myself an Omega B22 enlarger and set up a portable darkroom in the bathroom. Was totally hooked by then. Used to roll my own black & white film to keep costs down. Got a little more money and bought an Olympus OM1 SLR, later moving up to the OM2 and upgraded my enlarger to the classic Beseler 23C which I still have in the darkroom today.

Got a little more money and bought a house in which I was able to set up a permanent darkroom which still exists today. Used Ilford film and paper and began making black & white prints. Still photographed surfing in B&W, which was fine since the best surf season here at the Jersey Shore is winter and to this day, I still think is represented best in B&W images.

Along the way, we had a couple kids and real 9 to 5 jobs which occupied most of my time. Switched jobs to a technical field of business which besides occupying my day times, a lot of night time attempting to stay current in an ever changing field. Photography took a back seat, existing as mostly photographing the kids growing up.

But after awhile, got some more money and started to travel a bit, mostly to tropical places. Those scenes really begged for color representation. Shot mostly Fujichome slide film. Again keeping costs down but at the same time, the colors from that film were incredible compared to print film, at least when you hit the exposure properly.

More and more of my photography was taken up by surf and sports action. Got some more money and because of that, moved up to Canon equipment, giving my Olympus equipment to my daughter who is an excellent photographer and should be doing more of it. Bought an EOS A2 35mm camera which I still have today as my film camera, motor drive film advance and auto focus lenses.

The digital age of photography was blooming and I decided to make a website as I was in the IT business anyway, a chance to pick up some work related skills. Got some more money and bought a Canon film scanner and started to digitize my transparencies. I have to say I like the instant gratification of the digital age and the easy of sharing to a wide audience. However, I have concerns over controlling the final output. Digital images display quality are dependent upon the quality of the viewers monitor or viewing screen. When I print a fine image, I know what others are seeing, with posting a digital image I have no idea in what quality that image is seen.

Got some more money and moved up to the Canon L series lenses with their incredible glass. Got some more money and purchased a digital SLR, Canon 10D which I still have as a backup. But, with the ever increasing improvements in digital imaging, its 6 mega pixel capture had limited use; peoples’ smart phones have larger image capture capabilities now! Got some more money, purchasing a Canon 50D with its increased mega pixels, improved sensors and a host of other technical improvements over the 10D including image recording speed, a very important feature which using burst capture of large file images.

Got some more money and added the impressive Canon 7D DSLR to my equipment. Besides its improvements in image resolution, image recording speed and improved sensors, there were two reasons for adding another camera body. With my recent “retirement” from the IT industry, I have been spending more and more time in the Caribbean. A beautiful place but with limited access to camera equipment repair. Thus a need for a reliable decent backup camera was important. The second reason was, yup, got some more money and recently purchased a SPL waterhousing for DSLR cameras. Not entirely feeling comfortable putting that nice new 7D in the water, that became the second job of the 50D.

So there you have it the outline of the history of my 40+ years of photography. Another side benefit of leaving my day job was now I REALLY get to spend the necessary and desired time doing one of the things I really love, photographing. Oh yea, I get to spend A LOT more time doing another long time love of mine, surfing. You may have notice a theme about money. Yes, quality photography equipment is expensive. However, I still have some B&W prints from my Pentax Spotmatic and Omega enlarger on the walls of my home. They are still among my favorites and won ribbons in a judged show. In the early 70's I went to NYC to the Metropolitan Museum of Modern Art to see an Ansel Adams exhibit. All of his prints were stunning but the ones that I really made an impression on me was the collection made with a Polaroid camera. So it is the eye not the equipment that makes the photograph.

I hope you enjoy viewing the images I have selected for inclusion on this site as much as I have had recording them. Keep coming back as I periodically add new stuff. I am available for dedicated surf photography sessions should you desire, just use the Contact Me button found on any of the pages. And in case you haven’t already noticed, there are Buy buttons on pages also.